The film leaves with some good cards in hand. Between the classic but always appreciated decors of the big old-fashioned house and the unsanitary morgue, the setting is attractive and the photograph stands. Similarly, if the first part of the film does not claim much, it is neither shameful nor unpleasant. As The Vigil released in 2019, Demon’s Grasp changes stories of exorcisms all told on the same model of Catholic codes by leaning on Judaism. By using less rehashed folklore, the film retains a refreshing effect on his first half.

Unfortunately, it still conforms to the mold of cliché moralizing horror movie scripts in its denouement. An otherwise endless denouement which concludes a particularly laborious second part in which the characters pretend to die four times before breaking their pipes. We also forget almost completely the father-son relationship, supposed to be one of the moving arcs of the film, but how to make it exist within such a lame scenario, in which the secondary characters have no place?

IN THE COURT OF COURTS

Director Oliver Park has made a name for himself in the genre short film industry thanks to his films vicious and Still, respectively released in 2016 and 2017. The two films each tell the story of a woman alone at home who finds herself confronted with frightening manifestations (supernatural and without signs). That’s more or less all that these short films offer: poor and wobbly writing and staging, based solely on a striking appearance but that is not enough. And in a logical continuity, the same goes for this first feature film.

The actors, as insipid as their character, are a thorn in the side of the setting up of the story: the interest aroused by their misadventures will unfortunately remain very limited until the end of the film. And especially at the end of the film. As with the shorts cited, Park seems bet only on the effectiveness of a particular scene which, if very successful, cannot salvage the storyline’s endless tumble through the multiple artificial jumpscares. 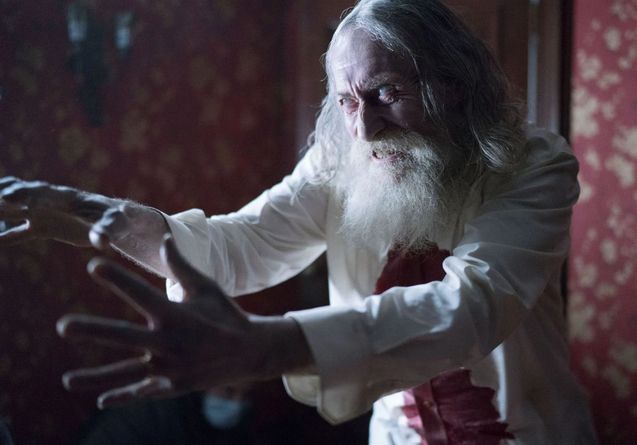 This very successful scene, what is it? Just like in the annabelle by John R. Leonetti who, in the middle of a barely passable film, hit very hard with the elevator scene, Demon’s Grasp Reserve a superb moment of fright of a confusing simplicity. In the middle of the morgue, a set of flashing lights and swinging doors gives rise to a striking appearance: the demon Abyzou. The creature is sufficiently plunged into darkness so that its very surprising design does not suffer too much from the mowed special effects (which will no longer be the case in the sequel to the film), and this sequence remains undeniably the most striking moment of the film.

Shining in the singular

He would have deserved to be more at the center of the story. The filmmaker could no doubt have abandoned the ghost of the little girl, completely off the mark and who suffers from the comparison with the rare successful scenes. And yet it is not complicated to scare with a ghost of a little girl. But this naughty kid – whose role remains very mysterious – is ultimately only one of the many symptoms betraying a construction made on easy diagrams, remained unfinished and which raise fears for the continuation of this transition to the long format. Demon’s Grasp: Review of a Demon